We arrive in Tirana, the capital of Albania on a flight from Rome, only about 1 1/2 hours. Tirana is a small, compact airport, getting bags and going through customs doesn't take long. Transport is pretty interesting in Albania, and I couldn't really find much information about late afternoon buses from Tirane to Shkodra, we're not sure we'll be able to catch a bus. So we decided to a transfer from the airport to our first destination in Albania, Shkodra. Jon met us at the airport with our names on a sign. It was a great, easy start to our Albanian adventure, Jon's English is excellent and we were able to chat about Albania, our travel plans and get some useful and interesting information and insight into Albanian life.
We're staying at  Hotel Tradita  transfer is 50 Euro from the airport, about 1 hr 15 minutes drive. 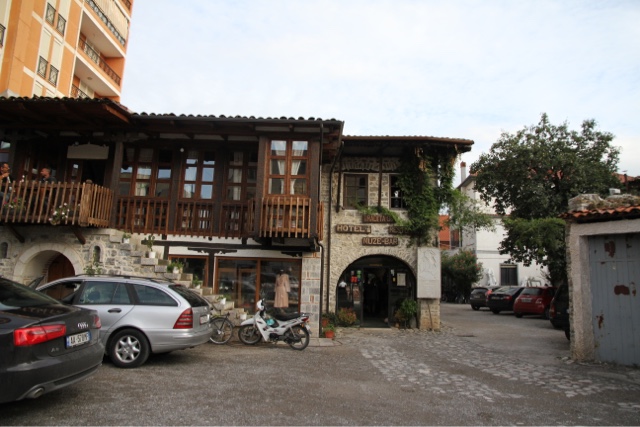 Love this place as soon as we step,out of the car! 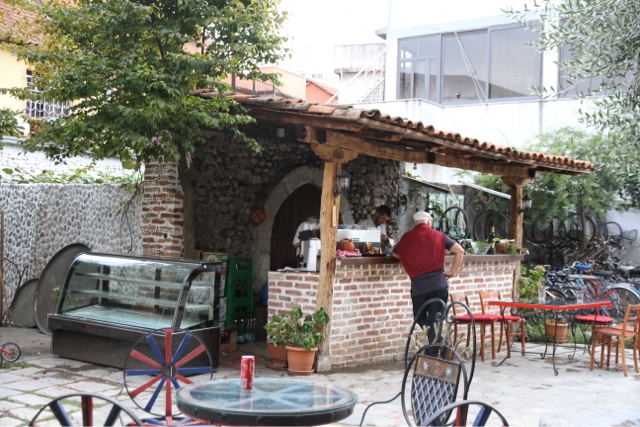 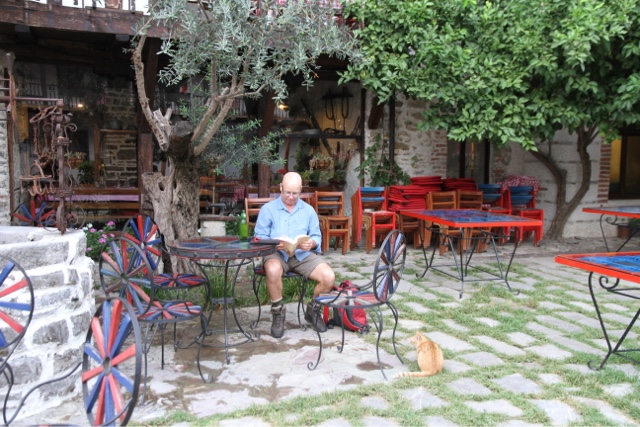 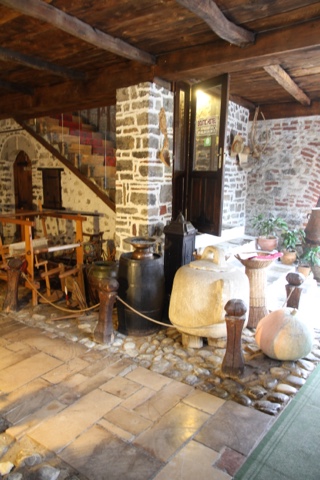 All the food and produce is sourced from local villages and cooked as ordered! The amazing fireplace is both for cooking, and heating the water. 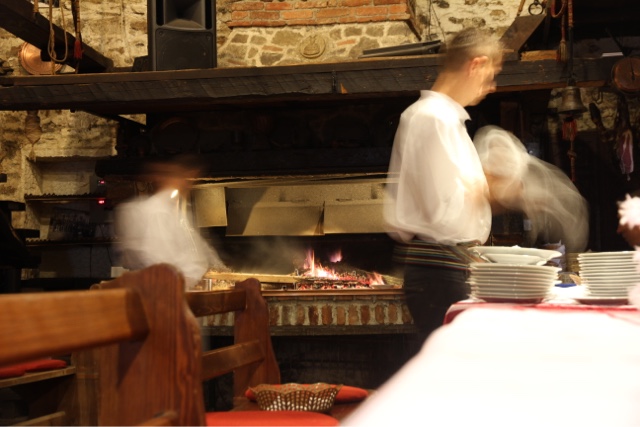 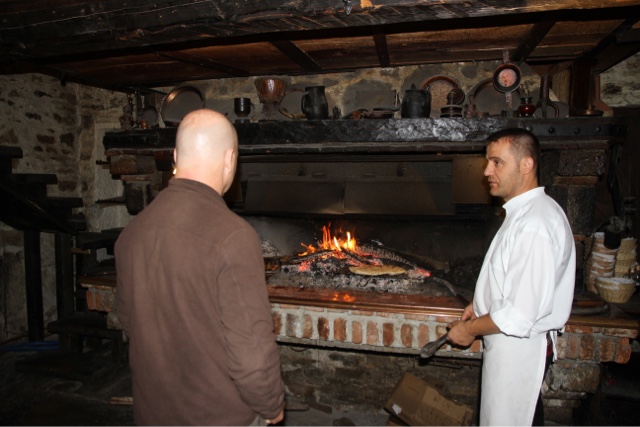 Below is a guest blog post from Patrick, outlining the intricacies of the amazing fireplace!
Arriving at the accommodation in Shkoder after a quick flight from Rome to Tirane, and a one hour taxi ride with Jon we were led to the entrance of a wonderful rock building.
Shown to our room we scrubbed up ready for dinner.
A couple of refreshing beers in the courtyard and then into the dining hall.
The hall is about 20 metres long by 5 metres wide. At one end was a large open fire. A guy was standing there cooking at the fire. Having built a number of cooking fire spaces over the years I wanted to see how it was constructed.
I walked over and was peering underneath the hearth which was about 1 metre off the floor. The cook and I had a conversation about the construction.
The fire was about 2 metres across about 1 metre deep and there was a metal hood overhead to direct the smoke up a brick chimney.
The base of the fire was concrete about 20cm thick. Cook them informed me that the base of the fire had copper piping running through it. He then led me to the side of the fire where a thermostat controller was fixed to the wall.  The fire apparently provides the whole of the hotel with hot water with the controller sensing temperature and adding any extra heat when required. The water is pumped through the slab and through networks of piping. In winter the fire goes constantly with a large storage pit for wood directly underneath.
Around the walls of this dining space we could see behind the seating and next to the walls arrays of copper pipe like radiators. The heat from the pipes is transferred into the walls to keep the room warm.
Apparently this process can also be reversed in summer with the heat being released through the pipework up the chimney.
We also saw a handy little cooking tray made of two wire racks that were joined in reverse making a sort of waffle iron but meshed. The cooking space in this tray was about 40cm square. Pieces of marinated vegetables and meat were placed into this tray and the cook just kept turning it directly on hot coals.
Needless to say the food was great, mixed with cold beers.
(Thanks Patrick, well done... Perhaps I may invite him to write another guest blog😉:) 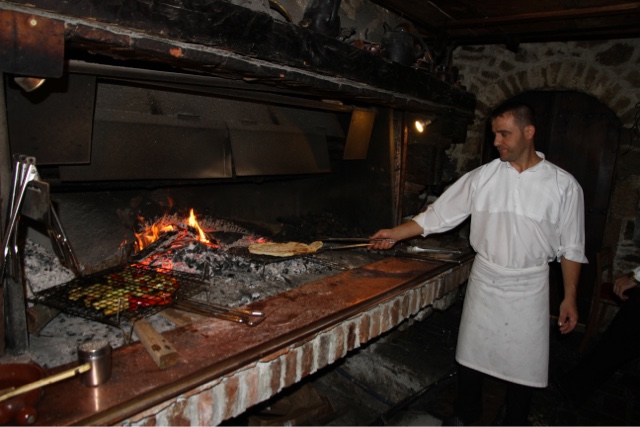 We enjoyed some live traditional music! 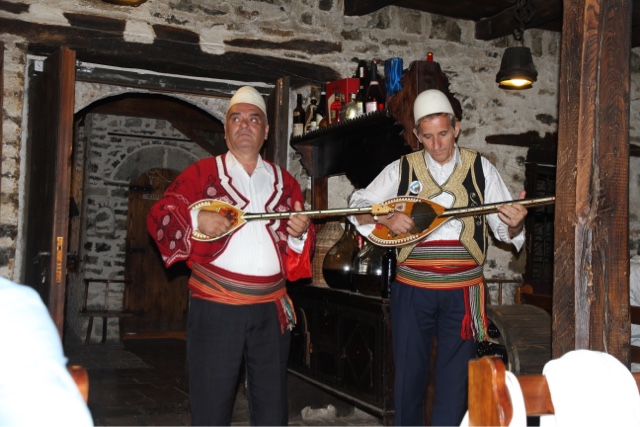 Friday 11th September
We spent about half hour in the vodafone shop, after handing over our passport, and signing documents, we were in possession of a SIM card, and data card 1300 leke for a month- SIM card for Patrick's phone and a data card for my iPad.
We wandered through the centre of Shkodra, lots of bicycles, small bikes and locals shopping and mingling, nice atmosphere.
Not sure where the ladies stop off for a coffee and chat, seems all the cafes are full of men! 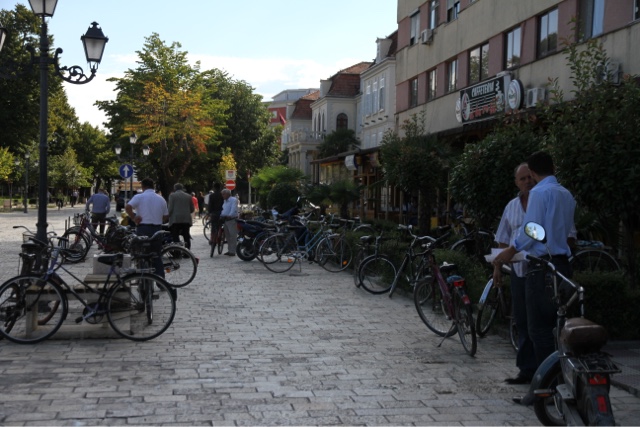 We walked up to Rozafa castle, about an hours walk from the centre of town 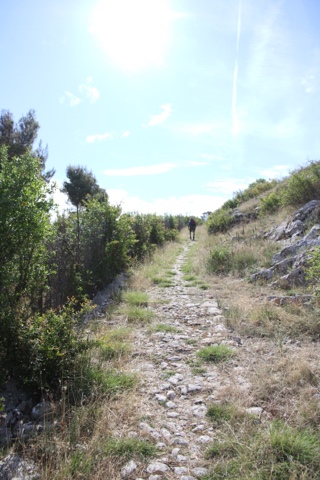 It's located on a very commanding position overlooking the lake and rivers, beautiful 360deg views! 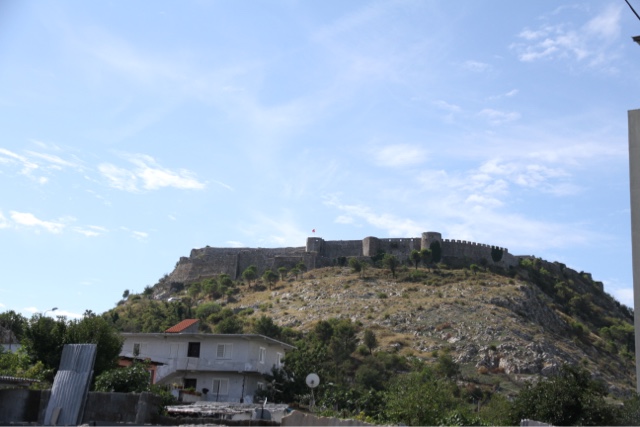 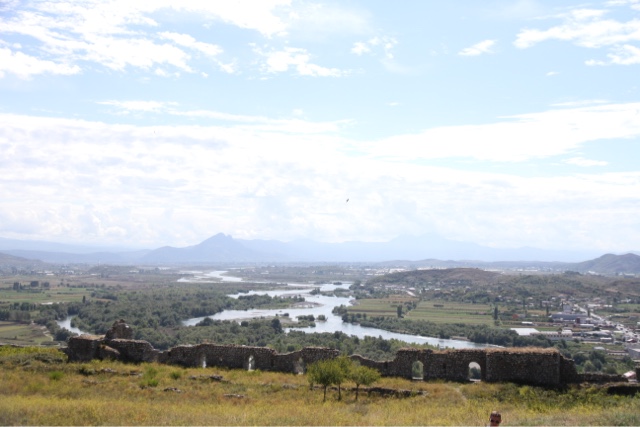 Kalaja/Rozafa Fortress, (2km southwest of Shkodra, near the southern end of Lake Shkodra),Founded by the Illyrians, rebuilt by the Venitians and the Ottomans. Legend has it that Rozafa is a woman buried in the ramparts, who sacrificed herself to stop the walls from collapsing, the museum has fascinating displays arranged in chronological order. 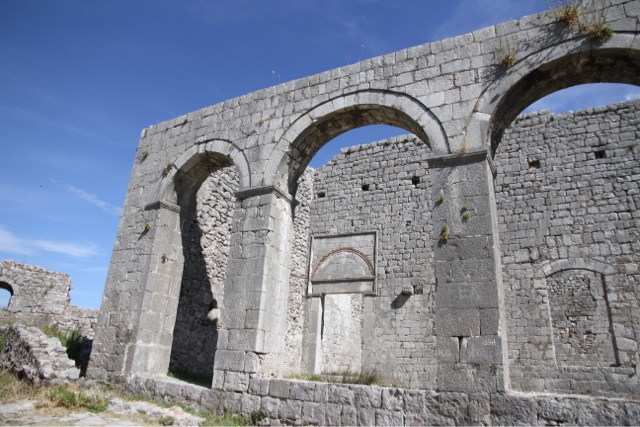 Love these lights! The two headed eagle is the Albanian symbol, representing courage, bravery and valour. 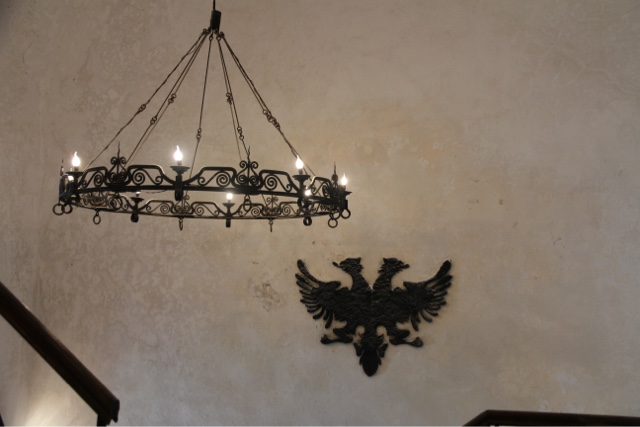 Quite a few scary looking weapons on display! 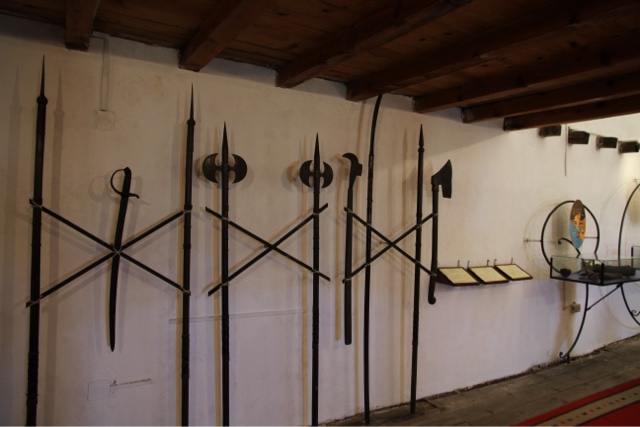 I experienced my first Albanian squat toilet- luckily I had tissues on hand - no toilet paper
We bought an espresso coffee at the castle kiosk, just as we were served the power went out, we sat in the dark inside the castle sipping our espresso, 5 minutes later the power came back on again. 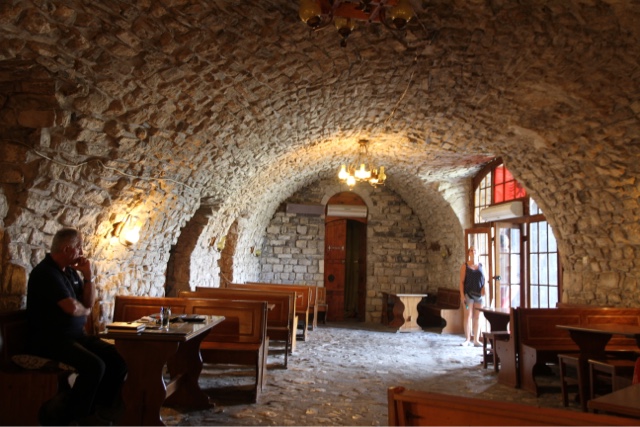 Lunch back at hotel tradita.Delicious local tomato salad with olive oil and local vinegar made from blackberries! 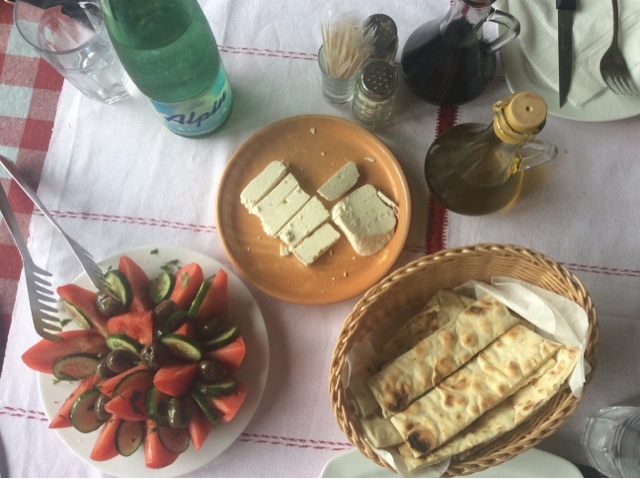 After lunch, we decide to use the hotels bicycles and cycle North to the Mes Ottoman bridge and viaduct at Mes, a village a few kilometers north of Shkodra. Called Ura e Mesit. 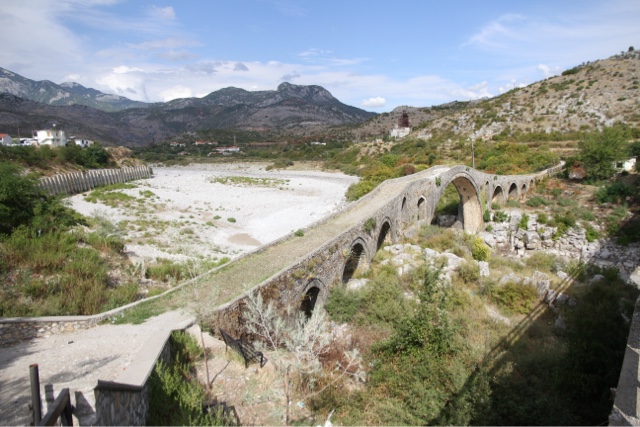 The famous Ottoman bridge – Ura e Mesit means „bridge in the middle“ – spans the Kir river and was built in around 1770 by Kara Mahmud Bushati, the local Ottoman pasha. Ura e Mesit is 108 m long, 3 m wide and it has 13 arches, of which the main span measures 22 m. It represents one of the longest and best preserved Ottoman bridges in the region. Ura e Mesit was built along the ancient trade road from Shkodra to Kosovo, which dates back to pre-Roman times. Much of the original route disappeared below the waters of the Drini valley dams, but in Mes you can still see how important this bridge has been, although the route was only a few meters wide. 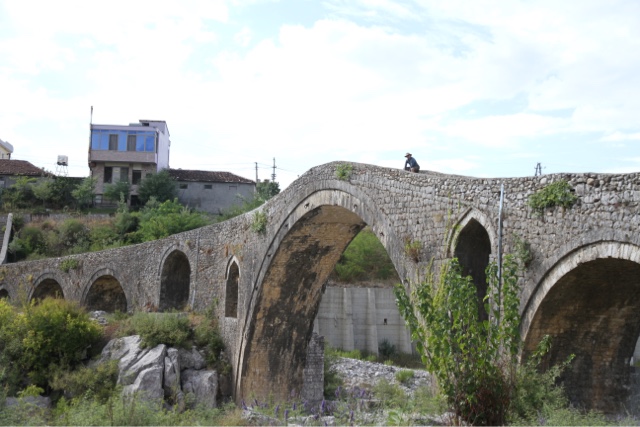 We cycled in a circuit, and on the way back to Shkodra the cycling was lovely and rural, we came across cows, goats, lovely little farms... The whole cycling adventure was easy flat cycling, probably about 12 km round trip. 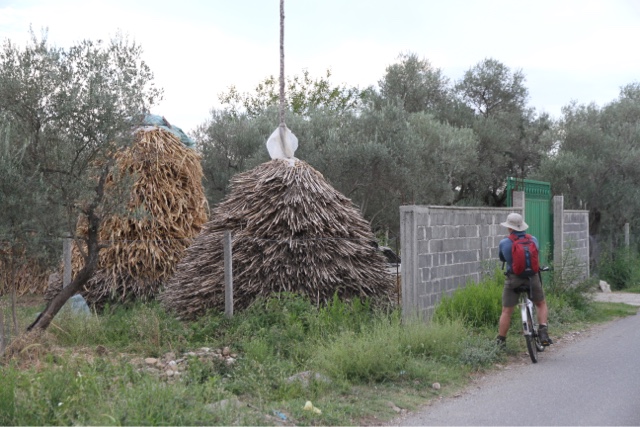 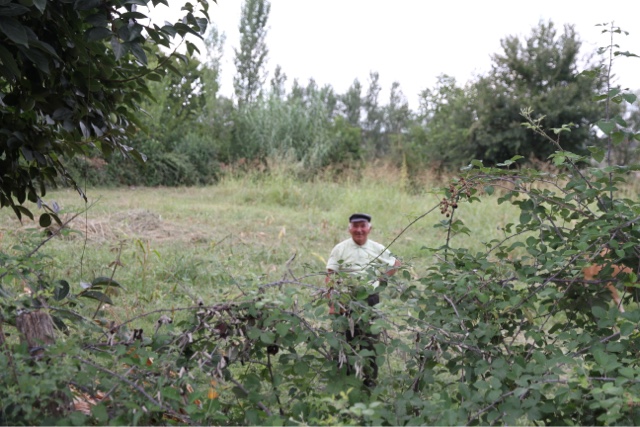 The goats and cows were wearing bells, sounded beautiful! 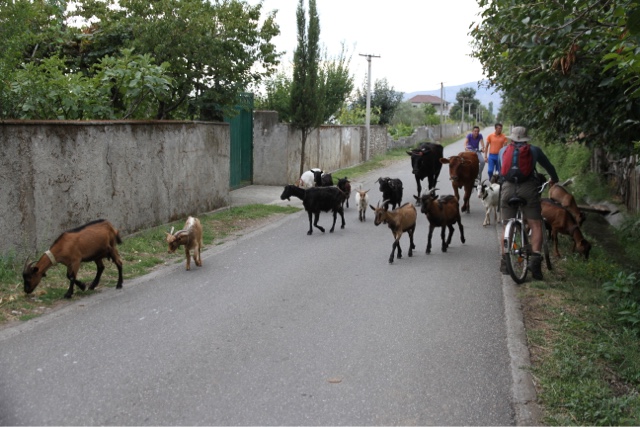 The old historical centre of Shkodra has some lovely Ottoman style houses. 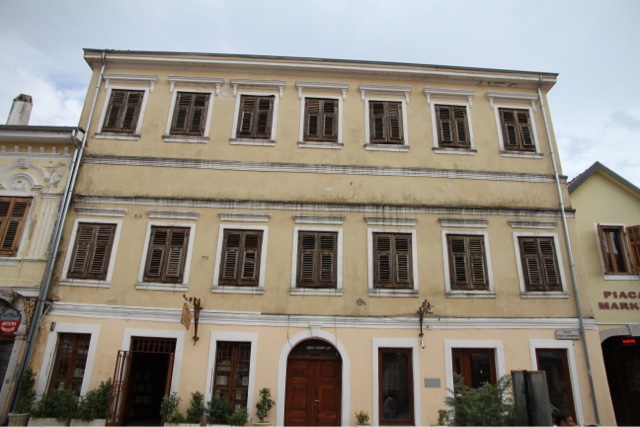 As we cycled along the pedestrian mall, the mezuin started the call to prayer from the mosque at the end, such a beautiful sound! 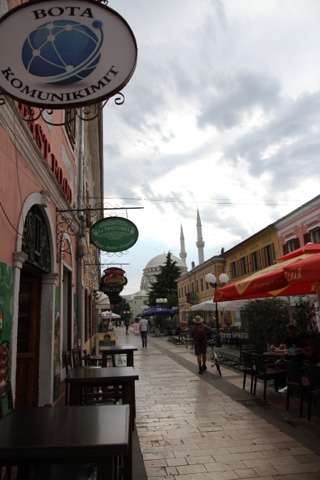 Email ThisBlogThis!Share to TwitterShare to FacebookShare to Pinterest
Labels: Albania, Shkodra, Via Egnatia